Our team managed to beat Bath’s second team quite easily thus coming one step closer in proceeding to the knock out phase of the tournament. One more game remains to be played on the group stages this coming Wednesday (16/11/2011). 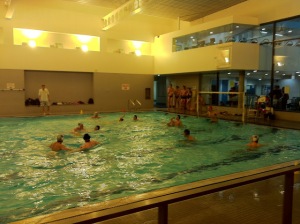 During all quarters of the game our team had the upper hand, consequently scoring 21 goals and conceding only 3. The squad was organised and managed to put in action many of the drills learned in training either they were defending or attacking ones.

The first quarter of the game ended with 5 goals being scored by our team and non from the opposition.

The second quarter can be dubbed as the most spectacular of the match as the Soton boys scored 7 goals and conceded none.

On the second half of the game our team kept the scoring pace at a high level by scoring 5 and 4 goals on the third and fourth quarter respectively. However, due to some defending flaws and misfortunes the team suffered the scoring of three goals.

Once again we would like to thank everybody for being there and supporting us!