From the get-go we were not optimistic for the game ahead of us. Meeting at redbrick at 5 for a 2-hour drive to Bristol we quickly realised how few players we had. Alex Wilmshurst had been “spilling his guts” in the toilet the night before, our captain Ali had injured ribs from some galivanting over the weekend and Wardy coming up with an even worse excuse than before saying he had “exercised too hard”. Nevertheless, we got to work frantically calling people up to see whether they would bum off work for a water polo game. After receiving a list of “no’s” from a few prospective saviours we decided that it was time to bring Ben Cannon on his debut water polo game for the firsts. At least we had 1 sub….

We all piled into the minibus where Tom Bragg declared that the last time he had driven was 6 months ago and that we should probably expect to crash somewhere off the M27. Little to our knowledge it was not going to be a human life he would take that night. After picking up Cannon from his house we set off toward Bristol onto the motorway where we eventually discovered, after an angry Range Rover screamed their horn at us, that we had gone at least 15 miles without any lights on the minibus—great start. All passengers made sure their seatbelts were securely fastened and considered remaining in the brace position for the rest of the journey. The remainder of the journey was pleasantly filled with Sparrow’s “cheeseroom playlist” with Dalton’s suggestion of “Drum and Bass” 10 minutes before we arrived “to get us hyped” being quickly ignored because who doesn’t get ready for a water polo game whilst belting out the lyrics to “Mr Brightside”? Parking in Bristol didn’t turn out to be the usual ball ache due to what can only be described as absolute finesse by Bragg with a quality reverse around a corner manoeuvre into a parking space.

We started the game against Bristol, playing the slow game to account for the single sub we could swap out for. The first quarter didn’t play out well with Bristol sending 2 goals into our net. Oli Dean saved us from a larger goal gap with an excellent save of a penalty that restarted our hopes for the rest of the game. We came back swinging for the second half with Dalton clawing back a goal a minute in. We kept hammering the goals in to a decimated Bristolian defence. This brought the score 3-5 to us after the second quarter. However, the lack of subs was beginning to take a toll and a tricky Bristolian pit attack player caused our players to commit a sum of majors. Chris was 1 major away from a wrap with the ref even reminding him that “it’s a long way back to Southampton”—leaving us completely in awe of his geographical knowledge.

Pineapple attempted to play pit defence at the beginning of the third quarter but realised that he had not hit the gym hard enough and was also 5 foot 5 and was quickly dominated by the pit player who was very skilled in playing for the foul. 2 majors for Pineapple later, we were now left with 3 players who were close to getting wrapped: Chris, Tom and Pineapple. Dalton’s Bristol leg cramp curse struck again meaning we were swapping over every goal that was scored.  Ben Cannon, still on his debut, took a shining to the Bristolian back net with 2 goals in the space of a minute. Very well played. By the end of the quarter we had left the audience on the edge of their seats with a 7-7 scoreboard, how was it that Southampton were holding up with their 1 sub for the 6 Bristolian subs? The excitement proved all too much for Pineapple’s Bristol friend as he took out his phone to record all the madness, but it sailed over the railings, slamming onto the poolside and deciding that it would like to greet the bottom of the pool. His soggy phone was quickly fished out by the Bristol 2nds.

The final quarter began, and Bristol tried to secure their win with 2 goals coming through our defence, leaving the score at 9-7. But Southampton were not done just yet, with 4 minutes left of the game we mustered all the energy we had left to slam 2 more goals home. One being a spectacular goal by Sparrow as he put into a play a tactic none of us had seen before, during a 1 on 1 he faked the shot but dropped it before he could shoot. The enemy supporters fell into hysterics due to the unbelief that he had missed, they were wrong. Swirling the ball around his head he slammed it home with a nifty and totally-planned shot. This brought the game to a tiebreaker of 9-9. By this point the troops were spent, we had given it all we could, Bristol kept their onslaught of fresh players as they kept pressing. 2 and a half minutes left of the game and Bristol managed to get one in, swiftly after Tom was wrapped and we finished the game only 2 goals down with a score of 11-9 to Bristol.

Southampton fared well while the odds were stacked heavily against us and so we were happy. As we boarded the minibus, we were all in good spirits with the result as we had played a good game and were all satisfied with ourselves. However, Tom was not satisfied, he wanted more, he wanted blood. We set off toward the nearest McDonalds for a well-deserved “McLoss”, taking a shortcut down a dark country lane. Tunes blaring and chit chat about how the game went filled the cabin of the mini-bus, this was where Tom made the conscious decision to plough right into the face of an unsuspecting-innocent-Bambi-looking-deer. As the mini-bus bounced a few feet off the ground everyone was confused to what had happened. The other passengers were quickly filled into what had occurred and it didn’t take long for Tom to acquire the new name of “Deer Murderer”. Upon arriving at McDonald’s, the bus was checked for damage but there was no trace apart from a token piece of fluff that Tom could take home from his recent kill and add to his collection. Sitting down in Maccy’s we all tucked into a well-deserved burger while Tom saved money by munching on the string of deer under the minibus.

Despite everything the boys should be proud for what they achieved, well except from Tom. 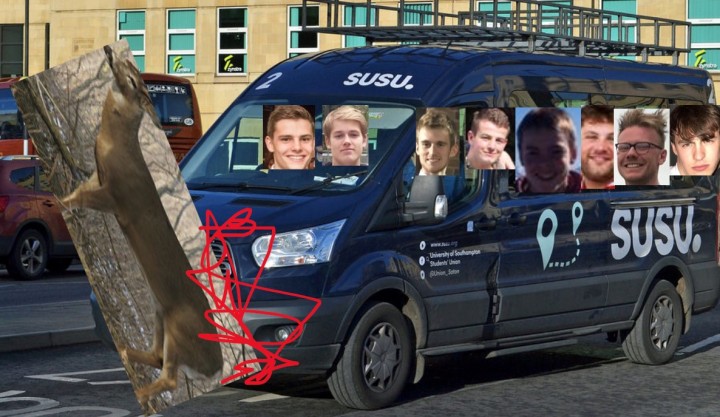